Correction of Drift: A Novel in Stories

It was called the crime of the century, and it was front-page news: the Lindbergh baby kidnap case. Correction of Drift: A Novel in Stories examines the endurance -- and demise -- of those consumed by catastrophe and besieged by grief. Every character brings a different past life to the event, be it a life of celebrity, or of misfortune and obscurity. There is Anne Morrow Lindbergh -- daughter of a millionaire, the shy poet who married a national hero; Charles Lindbergh -- the rough-and-tumble Minnesota barnstormer, who at age twenty-five made the first transatlantic flight, bringing him world-wide prestige; Violet -- the skittish family maid with a curious attachment to the boy and a secret life that lapses into hysteria and self-destruction; and the kidnappers -- an assembly of misfits with their own histories of misery. All are bound by the violence, turmoil, and mystery of the child’s disappearance as it becomes evident that each life has been irrevocably changed. Patterns of bereavement and loss illuminate these stories: despair at the death of a child; the retreat into seclusion; the comfort and the desolation of a marriage. But the heart of this novel is the far-reaching nature of tragedy and the ways the characters go on to live -- or end -- their lives.

"One of the most powerful prose stylists I have ever encountered. Correction of Drift is dazzling, original, and brings something completely new to American letters."

--Pat Conroy
"Correction of Drift is an elegiac lullaby, soothing and terrible, sung over the empty crib in the Lindbergh nursery. Ryder reimagines the event as shard-like sentences, some pretty as beach glass and others ugly and sharp. These sentences, headlines, and ransom notes accrue to powerful effect until even the table scraps, ‘crusts, bones, trimmings of fat,’ seem ominous portents of violence and loss."
--Christine Schutt
"Pamela Ryder illuminates the ways we drift off course -- perpetrator, victim, caretaker, witness -- and are subsumed by the dream of memory and longing."
--Dawn Raffel
"Ryder moves beyond fact -- the kidnapping of a child -- to explore the echo between the real and the unreal, between the historical and the imagined. The result is less amorphous: a fully realized work, which reveals Ryder as an irresistible, lyrical storyteller."
--Renée E. D’Aoust, The Brooklyn Rail
"You will be horrified, saddened, yet overall entertained as she transforms this historical event into tangible personal histories ... A truly fascinating read."
-- Elizabeth J. Colen, Her Circle
"Ryder spins her own linguistic adventure."
-- Irving Malin, The Hollins Critic

Correction of Drift: A Novel in Stories is published by FC2, an imprint of the University of Alabama Press, www.uapress.ua.edu. 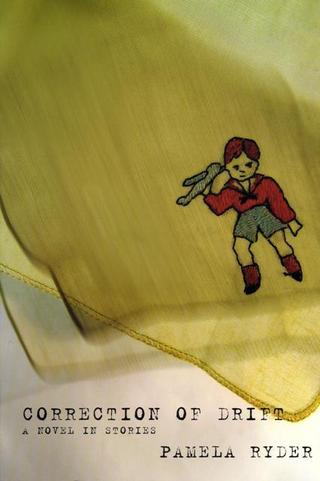